Breeding is a fascinating part of horsemanship. Most people who start horse-breeding become addictive to it and continue to breed more and more! 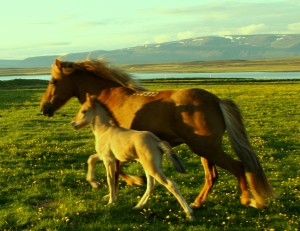 There are few things that are as exciting as getting a new foal out of your favorite mare and following it through the years until it becomes a well trained fully grown horse.

It’s important to keep certain things in mind when breeding horses. The first thing is that the goal should be clear, what kind of a horse do you want to breed and for whom. Remember also that half of the genes come from the stallion and half from the mare, so it is just as important to have a good mare as it is to have a good stallion. If you have a mare that you know well and you want to breed with her, then make sure you choose a stallion that matches her.

There are various ways of doing that and I’ll explain a little bit about the logic behind two most common ones.

One method is to find a stallion that has similar qualities as your mare, but even better, with the intent of making the good qualities even stronger.

Another method is to use a stallion that is very different from your mare, for example; if your mare has low leg action then you could choose a stallion with higher leg action. The intention of this method of breeding is to get the best from both parents however you should also keep in mind that in can go the other way and you might end up with the worst from both parents! 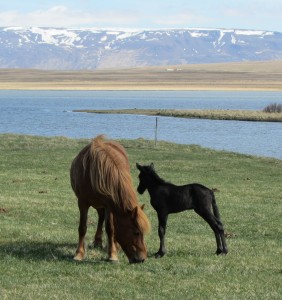 dless of what method they use, try to make sure that the stallion does not have exactly the same weaknesses as their mare in the hope that those weaknesses at least don’t get any worse in the offspring.

Let’s take an example with a mare that is a good 5 gaited mare, with excellent pace, and rather good tölt but weak trot. Her conformation is in most parts rather good except for the hooves that are bad and the character is sweet and perhaps lacks a bit more power. One breeder might choose to use a sweet, 5-gaited stallion that also has very good pace, hoping the offspring will be superb in pace and also trying to make sure that the sweet nature stays. The breeder probably tries to make sure though that the stallion has somewhat better trot than the mare and also better hooves.

Another breeder would go for a 4-gaited stallion with very strong trot, powerful and forward spirit, maybe with very good conformation as well, especially with superb hooves. He would be hoping to improve the conformation of the mare as well as the trot and add some power to her spirit as well.

That’s the ultimate lesson of breeding, you can never be sure, only increase the chances of getting what you are aiming for. The better you know the mare and her previous offspring, the better chance you have to pick a right match for her, especially if you also know the stallions in question.

But in general it can be stated that a successful breeder needs, not only good breeding horses that he knows well and a clear vision of what he’s aiming for, but also a fair bit of luck! Whatever your goals are with breeding don’t expect to make money from if because there are only few people that actually manage that, most of us spend more than we ever get back! Many choose simply never to calculate the real cost but even if you do, often we still feel it’s worth every penny when new foal arrives!